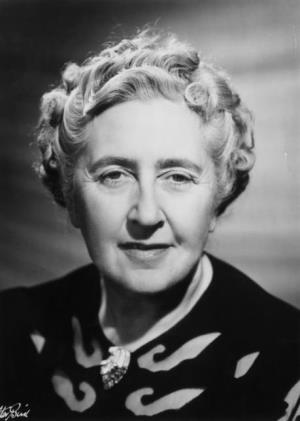 Agatha Christie is known all over the world as the Queen of Crime. She wrote 78 crime novels, 19 plays and 6 romantic novels under the name of Mary Westmacott. Her books have been translated into 103 foreign languages. She is the third best-selling author in the world (after Shakespeare and the Bible). Many of her novels and short stories have been filmed. The Mousetrap, her most famous play, is now the longest-running play in history.
Agatha Christie was born at Torquay, Devonshire. She was educated at home and took singing lessons in Paris. She began writing at the end of the First World War. Her first novel, The Mysterious Affair at Styles, was published in 1920. That was the first appearance of Hercule Poirot, who became one of the most popular private detectives since Sherlock Holmes. This little Belgian with the egg-shaped head and the passion for order amazes everyone by his powerful intellect and his brilliant solutions to the most complicated crimes. Agatha Christie became generally recognised in 1926, after the publishing of her novel The Murder of Roger Ackroyd. It's still considered her masterpiece.
When Agatha Cristie got tired of Hercule Poirot she invented Miss Marple, a deceptively mild old lady with her own method of investigation. Her last Poirot book, Curtain, appeared shortly before her death, and her last Miss Marple story, Sleeping Murder, and her autobiography were published after her death.
Agatha Christie's success with millions of readers lies in her ability to combine clever plots with excellent character drawing, and a keen sense of humour with great powers of observation. Her plots always mislead the reader and keep him in suspense. He cannot guess who the criminal is. Fortunately, evil is always conquered in her novels.
Agatha Christie's language is simple and good and it's pleasant to read her books in the original.
Write the correct phrase. Don't use full stops:
1. have been tronslated
2. considereed her masterpice
3. plesant to read her books
Источники:
И.В. Цветкова, И.А. Клепальченко и др. Английский язык для школьников и поступающих в ВУЗ.- Москва: «Глосса-Пресс», 206с.
http://www.mega-stars.ru/
Вход на портал или Быстрая регистрация
Предыдущее задание
Вернуться в тему
Следующее задание
Отправить отзыв
Нашёл ошибку?
Сообщи нам!