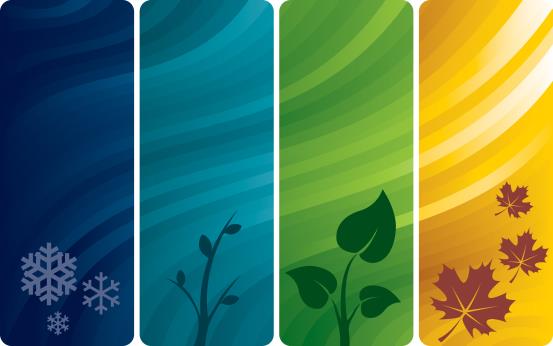 Everyone knows that there are four seasons in a year: spring, summer, autumn and winter. Each of them lasts 3 months.
Spring comes in March and ends in May. It often rains in spring, especially in April. Summer is the hottest season in the year. It begins in June and ends in August. In summer the sky is clear and cloudless. The days are long and the nights are short and warm. Summer brings fruits and vegetables. It is pleasant to spend this season by the seaside or somewhere in the country.
Autumn months are September, October and November. The days are becoming shorter, the sun loses its force. It often rains. It is the season of harvesting.
Winter lasts three months as well: December, January and February. It is getting colder day by day. The sun shines rarely and it snows of fen. But everything looks so pretty covered with snow.
So in every season there are bright and dark sides. But we must be thankful together whatever the weather.
Write true or false:
1. It often rains in spring, especially in May.
2. Summer brings fruits and vegetables.
3. In autumn the days are becoming shorter, the sun loses its force.
Источники:
http://english-lessons-online.ru/chitalka/topics/seasons-and-weather-vremena-goda-i-pogoda-
quotesgram.com
Вход на портал или Быстрая регистрация
Предыдущее задание
Вернуться в тему
Следующее задание
Отправить отзыв
Нашёл ошибку?
Сообщи нам!