15. Reading. The symbols of Australia

3 Б.
Read the text “The symbols of Australia” 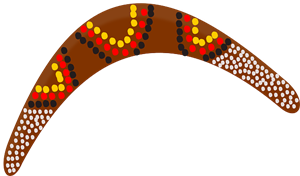 Рис. \(1\). Boomerang
What is the first thing that comes to your head when someone mentions Australia? Probably, kangaroo, desert and Sydney Opera House? Yes, these are stereotypical symbols of the country.
Kangaroo is an endemic species in Australia. Endemic means that you can find the animal only in this part of the world. Kangaroo is the totem of Australian aborigines and certainly one of the most amazing animal species ever.
Australian flag is based on the British Blue Ensign. There is a representation of the Southern Cross constellation — five stars on the blue field — and the Union Jack in the left upper corner (it reminds about the historical connection with the United Kingdom). The big star represents the Territiories and the states. But it's not the only Australian flag. There is the Aboriginal flag, representing indigenous people. It depicts a yellow circle on the background that is divided into two parts: black and red. The flag was designed in \(1971\).
The national colours of Australia are green and yellow (gold). The national anthem is “Advance Australia Fair”, but there is an unofficial one — “Waltzing Matilda”. Australians love their anthem. Australia is a part of the Commonwealth, so “God save the Queen” is played when the Queen visits the continent.

The coat of arms is very interesting. It reflects local animal and plant world. There are the ostrich emu and the kangaroo holding up the six symbols of six states. There is a twiglet of the golden wattle as well — it is the national tree.
One more national symbol of Australia is a boomerang. It's a weapon of aboriginal Australians who has used it for more than \(50 000\) years to hunt game. Later it became a military and cultural emblem. Boomerangs are sold as souvenirs everywhere in Australia.
Write the missing word into the phrase:
1. stereotypical  of the country
2. about the  connection
3. military and  emblem
Источники:
Рис. 1. Boomerang. Pixabay License CC0. https://pixabay.com/images/id-151561/ (Дата обращения 8.10.2021)
Вход или Быстрая регистрация
Предыдущее задание
Вернуться в тему
Следующее задание
Отправить отзыв
Нашёл ошибку?
Сообщи нам!