Study the vocabulary about climate in different countries. Part 1 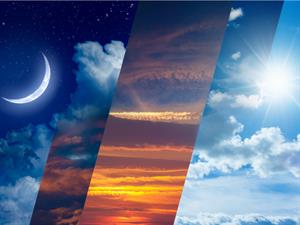 Mainland - the main part of a country or continent, not including the islands around it;
Belief - the feeling of being certain that something exists or is true;
Amount - a collection or mass, especially of something that cannot be counted;
Depend on - to trust someone or something and know that that person or thing will help you or do what you want or expect him, her, or it to do;
Further  - to a greater distance or degree, or at a more advanced level;
Mild - not violent, severe, or extreme;
Temperate - neither very hot nor very cold;
Due - expected to happen, arrive, etc. at a particular time;
Influence - affect or change how someone or something develops, behaves, or thinks;
Feature - a typical quality or an important part of something;
Occasionally - sometimes but not often;
Dry - used to describe something that has no water or other liquid in, on, or around it;
Wet - covered in water or another liquid;
Seldom - almost never;
Frost - a weather condition in which the air temperature falls below the freezing point of water, especially outside at night.
Examples:
They recently built a bridge between the mainland and the closest island.
Surely a friend should be someone you can depend on in difficult times?
We've had a mild winter this year.
The tyres on my car don't cope very well on wet roads.
There were a lot of hard/heavy (= severe) frosts that winter.
Предыдущая теория
Вернуться в тему
Следующая теория
Отправить отзыв
Нашёл ошибку?
Сообщи нам!