26. Reading. Plants and animals in Australia

3 Б.
Read the text "Plants and animals in Australia". 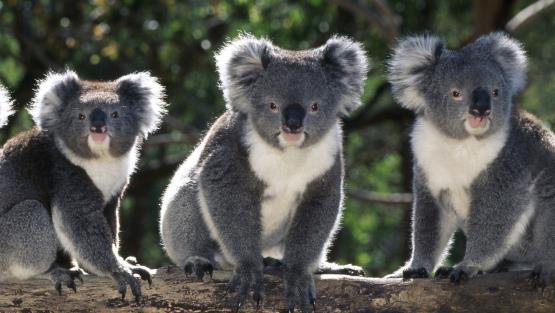 Australia has 20,000 species of plants and wildflowers such as the red and green kangaroo paw. There are 700 species of acacia and 1,200 species of eucalyptuses. Many of the trees lose their bark and a lot of flowers have no smell. Among the eastern coast and in Tasmania there are forests of pine, which rank second to the eucalyptus in economic importance. The tropical northeast belt with its heavy rainfall and high temperatures is heavily forested. There are a lot of bush lands in the coast of the country.
Australia states and territories have their own floral emblems: the common pink heath is the emblem of Victoria, waratah is the emblem of New South Wales, Cooktown Orchid is the emblem of Queensland, Sturt’s desert pea is the emblem of South Australia, blue gum is the emblem of Tasmania, rose is the emblem of Northern Territory, red and green kangaroo paw is the emblem of Western Australia.
Australia’s best-known animals are the kangaroo, koala, dingo (wild dog), Tasmanian devil (marsupial), wombats (bear-like marsupials), spiny anteater (or echidna) and many others. Two thirds of Australian native mammals are marsupials. The only egg-laying mammals in the world come from Australia, they are the platypus and echidna. Though the emu and the kangaroo are the symbols of Australia, there is less exotic animal, which also symbolizes the country. It is a sheep. There is a monument to sheep in one of the Australian cities. Nowadays there are about 150 million sheep in the country. Australia produces one fourth of the world’s wool production.
There are more than 700 bird species in Australia. Some of Australia’s best-known birds are the emu (which cannot fly, it is related to the ostrich), the lyrebird, bowerbird, kookaburra (or laughing jackass), many varieties of cockatoos and parrots and many others. Australia’s coastal waters and rivers contain many varieties of fish.
There are many national parks in Australia, Lichfield National Park is among them. There one can observe different plants and animals.
There are animal and bird emblems for Australia states and Territories. They are: platypus and kookaburra for New South Wales, possum and honeyeater for Victoria, koala for Queensland, wombat and a piping shrike for South Australia, numbat and black swan for Western Australia. Unofficial emblems for Australia are the red kangaroo and emu.
Write the word(s) into each phrase from the text:
1. bush  in the coast
2. about 150   sheep
3. possum and   for Victoria
Источники:
animalsofaustralia.com
Е.И.Кусунько, Е.С. Музланова. Английский язык. Все устные темы для подготовки к выпускному экзамену - Москва: Астрель, 479с.
Вход или Быстрая регистрация
Предыдущее задание
Вернуться в тему
Следующее задание
Отправить отзыв
Нашёл ошибку?
Сообщи нам!