Study the vocabulary about climate and conditions in different countries. Part 2 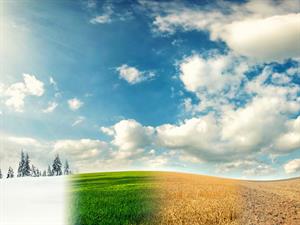 Wind - a current of air moving approximately horizontally, especially one strong enough to be felt;
Whirlwind - a tall, spinning column of air that moves across the surface of the land or sea;
Hurricane - a violent wind that has a circular movement, especially in the West Atlantic Ocean;
Drought - a long period when there is little or no rain;
Lack - the fact that something is not available or that there is not enough of it;
Reason - the cause of an event or situation or something that provides an excuse or explanation;
Occasion - a particular time, especially when something happens or has happened;
Unprepared - not prepared; not ready;
Behave - to act in a particular way;
Headline - a line of words printed in large letters as the title of a story in a newspaper, or the main points of the news that are broadcast on television or radio;
Changeability - power or skill needed to change;
Humid - (of air and weather conditions) containing extremely small drops of water in the air;
Cattle - cows and bulls that are kept for their milk or meat;
Lawn - an area of grass, especially near to a house or in a park, that is cut regularly to keep it short.
Examples:
There was a light wind blowing.
Her only problem is a lack of confidence.
For some reason the story caught the imagination of the public.
New York is very hot and humid in the summer.
Предыдущая теория
Вернуться в тему
Следующая теория
Отправить отзыв
Нашёл ошибку?
Сообщи нам!