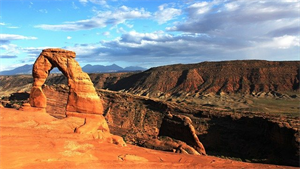 Рис. \(1\). Arizona
There are a few climate zones in America, so the climate in the US can vary from state to state. Alaska has an Arctic climate, Hawaii has a tropical climate and it's continental in the most of the states. Croplands are mostly in the central western and western part of the country. About \(45\) percent of the US is agricultural land, so in general continental US climate is good for farming. Iowa, Illinois, Nebraska are mainly agricultural states. The continental climate of the States and the climate of the central part of Russia are pretty similar.
The western coast temperatures don't change much, but in the North change of temperature is rapid, it’s about \(30\) degrees. Summers there can be sweltering. Winters can be freezing. As for the most northern state, Alaska, Juneau, its capital, has mid-latitude oceanic climate and the very north of the state has arctic climate.