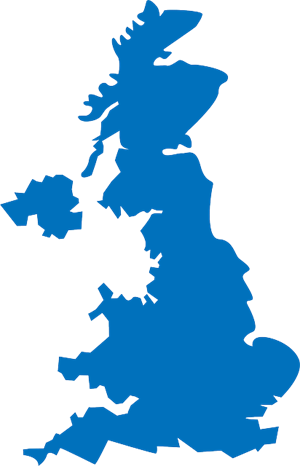 Рис. \(1\). The UK
The United Kingdom of Great Britain and Northern Ireland is also known simply as Britain. It is located mostly on two large islands. England, Northern Ireland, Wales and Scotland comprise the country. Their capitals are London, Edinburgh, Cardiff and Belfast.
The UK is on the west of Europe. The Gulfstream washes its shores. The English Channel separates Britain from the rest of Europe. The total area of Great Britain is over \(244,000 \)square kilometres.
The two main islands where the UK is situated are Great Britain and Ireland. There is Irish sea between them. Also there are lots of small islands scattered near the big ones. There are two large regions on the island of Great Britain — Lowlands and Highlands. Lowland Britain is in the south-eastern part of the country.
Highland Britain consists of Scotland and most of Wales. It is famous for its stunning landscapes. Mountains are not very high. The highest mountain is Ben Nevis. There are a lot of rivers in Great Britain, but they are not very strong. The Severn is the longest and the Thames is the deepest. There are a lot of fascinating lakes in the UK, especially in Scotland.  The best known of them is long narrow Loch Ness, legendary home of the famous monster. On the northwest side of the Pennine system lies the Lake District, containing beautiful lakes.
The largest cities of Great Britain are London, Birmingham, Liverpool, Manchester, Sheffield, Leeds, Edinburgh, Glasgow, Cardiff and Belfast. The population of the United Kingdom is over \(57\) million people. English is the official language. But some people speak Gaelic in western Scotland, and Welsh in parts of northern and central Wales.
The different parts of Britain have their own emblems. The red rose is the national emblem of England. The thistle is the national emblem of Scotland. The daffodils and the leek are the emblems of Wales. The shamrock is the national flower of Ireland. The flag of the UK is called the Union Jack. It includes the cross of St. George for the Kingdom of England, the cross of St. Andrew for Scotland and the cross of St. Patrick for Ireland.
Write the correct words into the gaps:
1. There is Irish  .
2. The best known of them is long narrow Loch Ness,   monster.
3. The different parts of Britain have their   .
Источники:
Рис. 1. The UK. Pixabay License CC0. https://pixabay.com/images/id-36481/ (Дата обращения 8.10.2021)
Вход или Быстрая регистрация
Предыдущее задание
Вернуться в тему
Следующее задание
Отправить отзыв
Нашёл ошибку?
Сообщи нам!