To speak about disasters, you need the appropriate vocabulary. Part 2 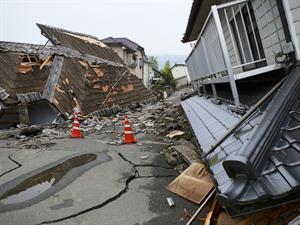 Arson - malicious burning to destroy property;
Barometer - an instrument that measures atmospheric pressure;
Beaufort scale - a scale from 0 to 12 for the force of the wind;
Blackout - darkness resulting from the extinction of lights;
Blow - be in motion due to some air or water current;
Cloud - a visible mass of water or ice particles suspended at a considerable altitude;
Crust - a hard outer layer that covers something;
Cumulonimbus - a dark cloud of great vertical extent charged with electricity; associated with thunderstorms;
Dam - a barrier constructed to contain the flow of water;
Erosion - the process of wearing or grinding something down;
Fatal - bringing death;
Fault - an imperfection in an object or machine;
Fire - the process of combustion of inflammable materials;
Fog - droplets of water vapor suspended in the air near the ground;
Force - the influence that produces a change in a physical quantity;
Forest fire - an uncontrolled fire in a wooded area;
Gale - a strong wind moving 45-90 knots;
Geyser - a spring that discharges hot water and steam.
Examples:
There are many forest fires in summer.
The Aswan High Dam is on the River Nile in Egypt.
Power lines were blown down and we had a blackout of several hours.
Have you ever seen cumulonimbus?
Предыдущая теория
Вернуться в тему
Следующая теория
Отправить отзыв
Нашёл ошибку?
Сообщи нам!