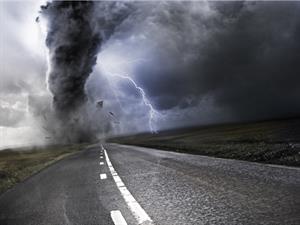 Tornadoes demolish houses, flip cars, cross rivers, dig 3 feet (0.9 meter) trenches, and lift lightweight objects 10,000 feet (3048 meters) into the air. A tornado is a lethal combination of wind and power. Tornadoes touch down all over the world, though most often in the United States.
A tornado is often a funnel cloud - a rotating column of air - that stretches from a storm to the ground. To be a tornado it must touch the ground. It can touch down for a few seconds or grind across the earth for miles. Tornadoes usually last less than 10 minutes.
Most tornadoes start from a supercell. A supercell is a rotating thunderstorm (called a mesocyclone). Supercells create the deadliest tornadoes.

The formation of a tornado is so complex, scientists have yet to understand it. The unpredictable and deadly nature of tornadoes also makes them difficult to study. No matter what movies show, scientists have had little success measuring or getting equipment into tornadoes. Not only is it dangerous, a tornado demolishes everything in its path, including measuring equipment. So, speeds and other factors remain a mystery.
The destruction caused by a tornado is undeniable and can be catastrophic. Though scientists will never be able to stop a tornado, the more they know, the more they can keep people safe.
Write true, false, doesn’t say.
1. Tornadoes usually last less than 20 minutes.
2. The formation of a tornado is easy, scientists know everything.
3. The destruction caused by a tornado can be catastrophic.
Источники:
http://kids.nationalgeographic.com/
Вход или Быстрая регистрация
Предыдущее задание
Вернуться в тему
Следующее задание
Отправить отзыв
Нашёл ошибку?
Сообщи нам!