To speak about natural disasters, you need to know the appropriate vocabulary. 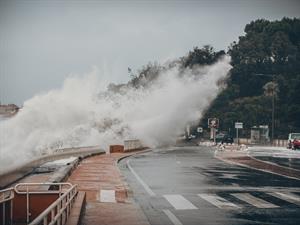 Thunder - the sudden loud noise that comes from the sky especially during a storm;
Lightning - a flash of bright light in the sky that is produced by electricity moving between clouds or from clouds to the ground;
Cyclone - a violent tropical storm or wind in which the air moves very fast in a circular direction;
Storm - an extreme weather condition with very strong wind, heavy rain, and often thunder and lightning;
Charge - to put electricity into an electrical device such as a battery;
Damage - to harm or spoil something;
Induce - to cause something to happen;
Thunderstorm - a storm with thunder and lightning and usually heavy rain;
Cause - to make something happen, especially something bad;
Blizzard - a severe snow storm with strong winds;
Typhoon - a violent wind that has a circular movement, found in the West Pacific Ocean;
Extreme - very large in amount or degree;
Clockwise - in the direction in which the hands (= thin parts that point) of a clock move;
Interplay - the effect that two or more things have on each other;
Wildfire - a fire that is burning strongly and out of control on an area of grass or bushes in the countryside.
Examples:
There was a clap of thunder and then it started to pour with rain.
Have you ever been struck by lightning?
A lot of trees came down in the storm.
We once got stuck in a blizzard for six hours.
Предыдущая теория
Вернуться в тему
Следующая теория
Отправить отзыв
Нашёл ошибку?
Сообщи нам!