1. Disasters in the world

To speak about disasters in the world, you need to know the appropriate vocabulary. 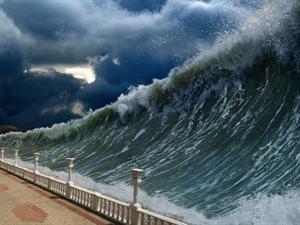 Flood - become covered in water;
Raging flood - flood with great force or violence;
Drought - a long period when there is no rain and people do not have enough water;
Decades of drought - a period of ten years when there is no rain and people do not have enough water;
Tornado - an extremely strong and dangerous wind that blows in a circle and destroys buildings as it moves along;
To predict - to say what you think will happen in the future;
Tsunami - an extremely large wave caused by a violent movement of the earth under the sea;
Earthquake - a sudden violent movement of the earth's surface, sometimes causing great damage;
Devastating - causing a lot of damage or destruction;
Hurricane - a violent wind that has a circular movement, especially in the West Atlantic Ocean;
Eye of a hurricane - the centre of a violent wind that has a circular movement;
Landslide - a mass of rock and earth moving suddenly and quickly down a steep slope;
Trigger - an event or situation, etc. that causes something bad to start;
Volcanic eruption - when a volcano erupts, it explodes and flames and rocks come out of it;
Heat wave - a period of days during which the weather is much hotter than usual;
Avalanche - a large amount of ice, snow, and rock falling quickly down the side of a mountain.
Examples:
The town was flooded when the river burst its banks.
A severe drought ruined the crops.
In 1906 an earthquake destroyed much of San Francisco.
The drought has had devastating consequences/effects.
Вернуться в тему
Следующая теория
Отправить отзыв
Нашёл ошибку?
Сообщи нам!