To speak about herbs and spices, you need the appropriate vocabulary. 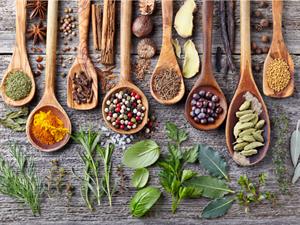 Basil - a herb with a sweet smell;
Chives - a plant with long, thin leaves used in cooking to give a flavour similar to onions;
Coriander - a herb that is used in cooking;
Dill - a herb whose seeds and thin feathery leaves are used in cooking;
Parsley - a herb that is added to food to give it flavour;
Rosemary - a herb that grows as a bush with thin, pointed leaves;
Sage - a herb whose leaves are used to give flavour to food;
Thyme - a herb used in cooking;
Chilli powder - a dark red powder made from dried chillies and other spices, used to give flavour to particular foods;
Cinnamon - a brown spice that is used in cooking;
Cumin - (a plant with) seeds that smell pleasant and are used as a spice, especially in South Asian and Western Asian cooking;
Curry powder - a dry mixture of spices used to flavour curries;
Nutmeg - the hard fruit of a tropical tree, or a brown powder made from this, used as a spice to add flavour to food;
Paprika - a red powder used as a spice to give a slightly hot flavour to food, especially in meat dishes;
Saffron - a yellow powder that is used as a spice.
Examples.
Grate some nutmeg on top of the pudding.
You can add sage in your soup.
Where can I buy thyme?
Saffron can be added in this salad.
Предыдущая теория
Вернуться в тему
Следующее задание
Отправить отзыв
Нашёл ошибку?
Сообщи нам!