3 Б.
Read the text and choose the correct answer. 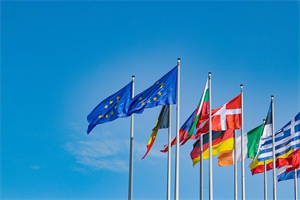 The European Union was formed after the catastrophes of two world wars and the main goal of it was to unite the countries and people and ensure that the horrors of war and atomic bombings would never happen again.
Germany, Belgium, Luxembourg, France, the Netherlands and Italy founded the Union. In the wake of the Treaty of Rome the European Economic Community was established.

All custom duties were lifted when the EU countries traded with each other. Also they agreed to control food production so that nobody in these countries starved.
\(1970\)-\(1979\): New countries

Denmark, Ireland and the United Kingdom join the European Union in \(1973\). The European Parliament became more influential and six years later the citizens could participate in direct elections.
\(1980\)-\(1989\): The Berlin Wall falls

Greece, Spain and joined the Union. In \(1987\) the Single European Act was signed. In \(1989\) the Berlin Wall, separated two parts of Germany, finally fell . East and West Germany reunited.
\(1990\)-\(1999\): Europe without borders
In \(1993\) the Single Market concept is completed. The are the 'four freedoms' of: movement of goods, services, people and money. Finland, Austria and Sweden joined the EU. The Schengen agreement was signed. It allowed people to travel without visas or even passport control.

The euro is the currency for Europe. Only Britain refused to accept euro and kept pound of sterling. In \(2020\) the UK left the EU. the EU is a stong political force and it accepts new countries as members of the Union now and then.
Choose true or false:
1. Also they didn't agree to control food production so that nobody in these countries starved.
2. In the wake of the Treaty of Rome the European Economic Community was established.
3. In \(1993\) the Single Market concept is completed.
Источники:
Рис. 1. The European Union. Pixabay License CC0. Free for commercial use No attribution required. https://pixabay.com/images/id-6405066/ (Дата обращения 11.10.2021)
Вход или Быстрая регистрация
Предыдущее задание
Вернуться в тему
Следующее задание
Отправить отзыв
Нашёл ошибку?
Сообщи нам!