To speak about illness, sickness, diseases, you need the appropriate vocabulary. 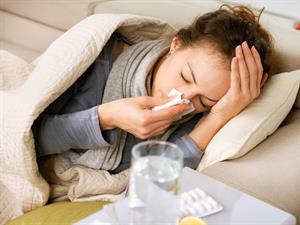 Asthma - an illness which makes it difficult to breathe;
Bronchitis - an illness in your lungs which makes you cough and have problems breathing;
Influenza - flu (= an illness like a very bad cold, that makes you feel hot and weak);
Stroke - a sudden problem in your brain that changes the flow of blood and makes you unable to move part of your body;
To break one's leg/arm - to damage a bone in your leg/arm, etc;
Abscess - a painful, swollen area on the body which contains a yellow liquid;
Cold - a common illness which makes you sneeze and makes your nose produce liquid;
Incurable illness/disease - sickness that is impossible to cure;
Poison - a substance that can make you ill or kill you if you eat or drink it;
Fracture - to break something hard such as a bone, or a piece of rock;
Cut - to injure yourself on a sharp object which makes you bleed;
Pimple - a small spot on your skin;
Cancer - a serious disease that is caused when cells in the body grow in a way that is uncontrolled and not normal;
Heart attack - when someone's heart suddenly stops working correctly, sometimes causing death;
Bruise - a dark area on your skin where you have been hurt;
Sunstroke - an illness caused by spending too much time in the sun;
Rash, (skin) eruption - a group of small, red spots on the skin;
Epidemic - when a large number of people get the same disease over the same period of time;
Ulcer - a painful, infected area on your skin or inside your body.
Examples:
She had an asthma attack.
Carolyn broke her leg in a skiing accident.
He caught a bad cold at school.
She cut her finger on a broken glass.
I think he's had a heart attack.
Источники:
Предыдущая теория
Вернуться в тему
Следующая теория
Отправить отзыв
Нашёл ошибку?
Сообщи нам!