Study the vocabulary, if you want to speak about Olympic Games. 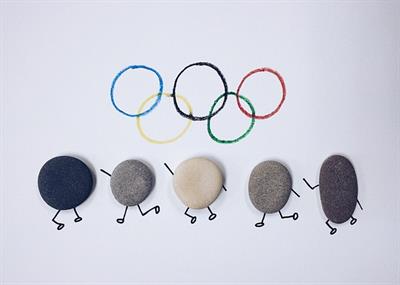 Praise - to express admiration or approval of the achievements or characteristics of a person or thing;
Appear - to start to be seen or to be present;
Honour - a reward, prize, or title that publicly expresses admiration or respect;
Renew - to increase the life of or replace something old;
Nobleman - a member of the nobility (= the highest social rank in a society);
To host - to provide the space and other things necessary for a special event;
Continuation - the fact of continuing or a thing that continues or follows from something else;
Interlaced - to join different parts together to make a whole, especially by crossing one thing over another or fitting one part into another;
Background - the things that can be seen behind the main things or people in a picture;
Motto - a short sentence or phrase that expresses a belief or purpose;
Thrill - a feeling of extreme excitement, usually caused by something pleasant;
Support - if you support a sports team or a sports player, you want them to win, and might show it by going to watch them play.
Examples:
He should be praised for his sport achievement.
Every year I renew my membership of the sports club.
Which country is hosting the next Olympic Games?
Which team do you support?
Источники:
Источники
Источники:
https://pixabay.com/images/id-1613101/
Предыдущая теория
Вернуться в тему
Следующая теория
Отправить отзыв
Нашёл ошибку?
Сообщи нам!