To speak about city objects, you need the appropriate vocabulary. Part 2 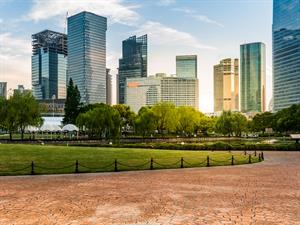 University - a place where people study for an undergraduate (= first) or postgraduate (= higher level) degree;
Institute - an organization where people do a particular type of scientific, educational, or social work, or the buildings that it uses;
School - a place where children go to be educated;
Kindergarten - the first year of school, for children aged five;
Shop - a place where you can buy goods or services;
Fair - a large public event where goods are bought and sold, usually from tables that have been specially arranged for the event, and where there is often entertainment;
Avenue - a wide road with trees or tall buildings on both sides, or a wide country path or road with trees on both sides;
Street - a road in a city or town that has buildings that are usually close together along one or both side;
Lane - a narrow road in the countryside or in a town;
Square - an area of approximately square-shaped land in a city or a town, often including the buildings that surround it;
Pavement - a path with a hard surface on one or both sides of a road, that people walk on;
Pedestrian - a person who is walking, especially in an area where vehicles go;
Traffic lights - one of a set of red, yellow, and green lights that control the movement of vehicles, usually at a point where two or more roads join;
Roadway - the part of the road on which vehicles drive;
Bumpy road - not smooth road;
Crossing - a place where something such as a road, river, etc. can be crossed safely, or a place where a road and a railway meet and cross each other.
Examples:
She was rejected the first time she applied to the university, but when she reapplied the following year she was accepted.
The institute derives all its money from foreign investments.
I bought a wooden salad bowl at the local craft fair.
He drives so fast along those narrow country lanes.
We drove along a narrow, bumpy road.
Предыдущая теория
Вернуться в тему
Следующая теория
Отправить отзыв
Нашёл ошибку?
Сообщи нам!