To speak about country and city, you need the appropriate vocabulary. 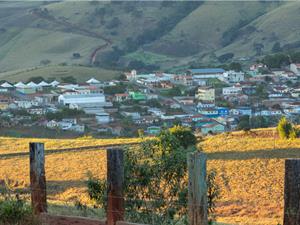 State - a country or its government;
Country - land that is not in towns, cities, or industrial areas and is either used for farming or left in its natural condition;
Сountryside - land not in towns, cities, or industrial areas, that is either used for farming or left in its natural condition;
Сapital city - a city that is the centre of government of a country or smaller political area;
Town - a place where people live and work, containing many houses, shops, places of work, places of entertainment, etc., and usually larger than a village but smaller than a city;
Village - a group of houses and other buildings that is smaller than a town, usually in the countryside;
Suburb - an area on the edge of a large town or city where people who work in the town or city often live;
Outskirts - the areas that form the edge of a town or city;
Environs - the area surrounding a place, especially a town;
District, region - an area of a country or town that has fixed borders that are used for official purposes, or that has a particular feature that makes it different from surrounding areas.
Examples:
Some theatres receive a small amount of funding from the state.
He lives out in the country somewhere.
Would you prefer to live in the country instead of a town?
The countryside around there is beautiful.
Box Hill is a suburb of Melbourne.
Вернуться в тему
Следующая теория
Отправить отзыв
Нашёл ошибку?
Сообщи нам!