To speak about city objects, you need the appropriate vocabulary. Part 1 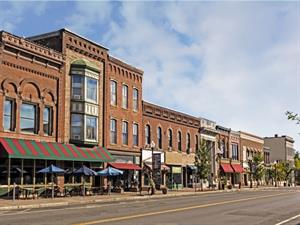 Cathedral - a very large, usually stone, building for Christian worship;
Church - a building for Christian religious activities;
Cemetery - an area of ground in which dead bodies are buried;
Chapel - a building used for Christian worship by Christians who do not belong to the Church of England or the Roman Catholic Church;
Convent - a building in which nuns (= members of a female religious order) live;
Fortress - a large, strong building or group of buildings that can be defended from attack;
Monument - a structure or building that is built to honour a special person or event;
Museum - a building where objects of historical, scientific, or artistic interest are kept;
Memorial - an object, often large and made of stone, that has been built to honour a famous person or event;
Tomb - a large stone structure or underground room where someone, especially an important person, is buried;
Gallery - a room or building that is used for showing works of art, sometimes so that they can be sold;
Exhibition - an event at which objects such as paintings are shown to the public, a situation in which someone shows a particular skill or quality to the public, or the act of showing these things;
Theatre - a building, room, or outside structure with rows of seats, each row usually higher than the one in front, from which people can watch a performance or other activity;
Cinema - a theatre where people pay to watch films;
Circus - a group of travelling performers including acrobats (= people skilled in difficult physical movements) or those who work with trained animals, or a performance by such people usually in a large tent;
Library - a building, room, or organization that has a collection, especially of books, for people to read or borrow, usually without paymen;
Court of law - a place where trials and legal cases are decided, or the group of people who deal with legal cases there;
Enterprise - an organization, especially a business, or a difficult and important plan, especially one that will earn money;
Academy - an organization intended to protect and develop an art, science, language, etc., or a school that teaches a particular subject or trains people for a particular job.
Examples:
The old city around the cathedral is the most colourful part of town.
The town has four churches.
The statue was erected as a memorial to those who died in the war.
He frequently exhibits at the art gallery.
Don't forget this is a commercial enterprise - we're here to make money.
Предыдущая теория
Вернуться в тему
Следующая теория
Отправить отзыв
Нашёл ошибку?
Сообщи нам!