13. Reading. The White Cliffs of Dover

3 Б.
Read the text about the White Cliffs of Dover. 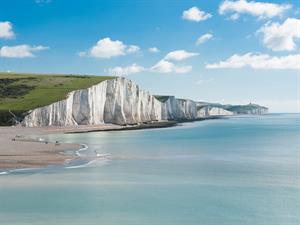 When crossing the English Channel from continental Europe to Dover, England, the first sight you see is the famous White Cliffs of Dover. They are almost 70 million years old and have been in existence since dinosaurs were roaming the earth. Their characteristic white colour is due to the fact that they are made of chalk. They are believed to grow 15 metres every million years and are now around 250 metres high.
Due to their strategic location they have been used to help defend the coast from invasion throughout England’s history. During the time of Napoleon, tunnels were dug into cliffs so that soldiers could attack the invading French armies. These tunnels were used as recently as World War II. There are many shipwrecks to be found in the bays and along the beaches below the cliffs because the sea is exceptionally rough along this stretch of the coast.
What’s more, there is plenty to see and do in the surrounding area. You can visit one of Dover’s many spectacular heritage castles or even the Roman fort at nearby Richborough. The White Cliffs themselves are an excellent place of hiking, and offer stunning views of one of the world’s busiest shipping lanes.
On a clear day, you can see the French coastline. A visit to England would not be complete without a stopover at this magnificent natural feature.
Choose true or false.
1. The White Cliffs are made of chalk.
2. During the time of Napoleon, tunnels were dug into cliffs.
3. You don’t have a chance to visit the Roman fort at nearby Richborough.
Источники:
Virginia Evans, Jenny Dooley. Upstream. Intermediate. Newbury: Express Publishing, p.222
Вход или Быстрая регистрация
Предыдущее задание
Вернуться в тему
Следующее задание
Отправить отзыв
Нашёл ошибку?
Сообщи нам!