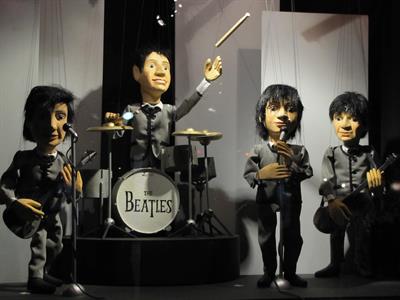 The Beatles to this day are one of the most famous and popular rock'n'roll groups in the world. The group shattered many sales records and had more than fifty top hit singles. The Beatles started a new era of music. Their music was unusual because most rock was strong beat with no melody, and they added melody to the rock. The Beatles also added strong and meaningful lyrics.
The group included George Harrison, John Lennon, Paul McCartney, and Richard Starkey (Ringo Starr). All of the Beatles where born and raised in Liverpool, England. John Lennon was the leader of the band, one of the two lead singers, the rhythm guitarist and a song writer. George Harrison was the lead guitarist. Paul McCartney was a song writer, one of the two lead singers, and a bassist. Ringo Starr played the drums.
The Beatles were discovered on November 9, 1961 by Brian Epstein, a manager of a record store in Liverpool. The Beatles early music was influenced by singers Bob Dilan, Chuck Berry and Elvis Presley. Their first two song were Love Me Do and Please, Please Me. After a while their own musical ideas started to emerge, and their music developed from naive and simple to sophisticated. The Beatles starred in two feature films, A Hard Days Night, which earned 1.3 million dollars in its first week, and Help. They also had their own full length cartoon called Yellow Submarine.
In 1964 The Beatles came to New York City for the first time and were an instant success. A couple of weeks later after their New York appearance, the five best selling records were by The Beatles; they became world-famous. They introduced a new style in clothing and appearance, too. They wore their hair long and shaggy, and soon all over the world people started wearing the Beatles haircut. They were so popular that 'Beatlemania' emerged. In 1967 the Beatles directed a movie Magical Mystery Tour about themselves, in which they toured the English countryside in search of wonder, fun, and magic.
In 1970 the world-famous and world-loved Beatles separated. Thirty-five years later, in 2005, the American entertainment industry magazine Variety named them the most iconic entertainers of the 20th century.
Fill in these phrases:
1. music was   by singers
2. for the first time and were an  success
3. which they toured the English   search of wonder
Источники:
http://www.alleng.ru/engl-top/476.htm
https://pixabay.com/photos/augsburg-puppet-theatre-1175879/
Вход или Быстрая регистрация
Предыдущее задание
Вернуться в тему
Следующее задание
Отправить отзыв
Нашёл ошибку?
Сообщи нам!