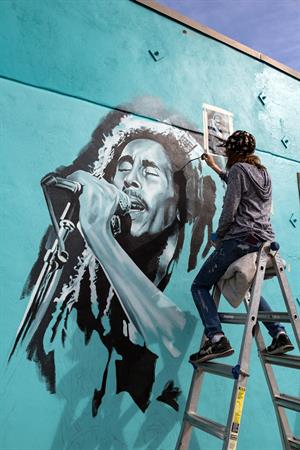 My name is Maria and I’m 14 years old. My hobbies are listening to music and drawing. I would like to tell you a few words about my favourite musician, Bob Marley.
He was a Jamaican reggae singer and songwriter. He was also a talented musician and guitarist. Although he died many years ago, his fame and international recognition are still alive. I like listening to his music, because it cheers me up and keeps in a good mood. I know that apart from being a musician, Bob Marley was a wise man. He was against the war and against any racial, national, religious or sex discrimination.
He wanted everybody on Earth to live in peace and harmony. The songs that I especially like by Bob Marley are “Sunshine Reggae” and “Give Me Just a Little Smile”.
By the way, my favourite singer was born on February 6th 1945, in Jamaica. His father died when he was a child. Together with his friend Bunny Wailer, also a Jamaican-born musician, Marley formed a small music band. At the age of 12, he was already playing with a successful vocal group.
It is interesting that he had no official vocal training, but his voice was superb. Many people nowadays call him the king of reggae or the father of Jamaican music and they are certainly right. Millions of people fell in love with the music he played.
He died at the age of thirty-six. However, his music is still alive and it has influenced many other prominent musicians, such as Bono, Lauryn Hill. His kind quotations are often cited by people around the world. And, it goes without saying that Bob Marley is listed among 100 greatest musicians of all times.
Write true or false:
1. Maria’s favourite hobbies are reading and walking.
2. At the age of 16, Marley was already playing with a successful vocal group.
3. Bob Marley is listed among 100 greatest musicians of all times.
Источники:
http://en365.ru/my_favourite_musician.htm
https://pixabay.com/photos/artist-austin-texas-bob-marley-3401388/
Вход или Быстрая регистрация
Предыдущее задание
Вернуться в тему
Следующее задание
Отправить отзыв
Нашёл ошибку?
Сообщи нам!