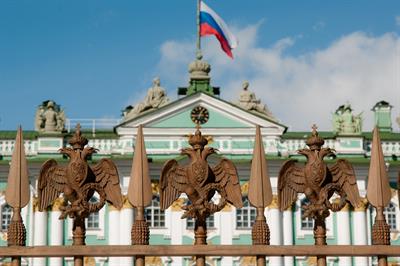 According to the Constitution adopted in \(1993\), the Russian Federation is a presidential republic. Just like political systems in other countries, our political system also has three branches of power: legislative, executive and judicial. The Federal Assembly represents the legislative branch of power. It is also made up of two houses: the Federation Council and the State Duma, which make laws. Both houses are headed by chairmen called speakers. Russia is divided into \(89\) federal subjects. Each subject elects two representatives to the Federation Council, so there are \(178\) members in the Federation Council.
The State Duma consists of \(450\) deputies. \(225\) members are elected directly by the people. The other half of deputies is appointed by their parties after party-list voting according to which every party gains a number of seats. The main function of the Federal Assembly is to make laws. Every law must be approved by the State Duma and the Federation Council, and signed by the President. The Federal Government represents the executive branch of power. It consists of the Prime Minister and the Cabinet of Ministers.
The President is the head of state in Russia and he is elected directly by the people. In fact he has a lot of power. The President can even dissolve the State Duma if it doesn’t agree with his suggestions three times running. The President has his Administration but it is not part of the Federal Government. The President is involved in the work of the legislative and executive branches. The judicial branch of power is represented by the Supreme Court and the Constitutional Court. The Supreme Court is the highest court for civil and criminal cases. The responsibility of the Constitutional Court is to determine whether new laws or actions of President correspond to the Constitution. The Constitution isthe main law of Russia. It guarantees the rights and freedoms of Russian citizens.
Russian political system also has «the system of checks and balances» like that in the USA. For example, the President appoints the heads of the Federal Government and the Chairman of the Government, but the State Duma must approve his appointment. The President can veto laws passed by the Federal Assembly, but the Federal Assembly can pass laws over the President’s veto by a two-thirds majority. The Constitutional Court has the right to declare actions of the President, the Federal Assembly and the Federal Government unconstitutional. There are many political parties in our country. The most well known are the Communist Party, the Liberal Democratic Party, the «Unity» Party, the Union of the Right Forces and the «Apple» Party.
Write five words into each gap:
1. Each subject   Federation Council, so there are \(178\) members in the Federation Council.
2. The President has his Administration but it is not .
3. The President is involved in the work of  .
Источники:
www.learnrussianlanguage.ru
И. Кусунько, Е. С. Музланова. Английский язык. Все устные темы для подготовки к выпускному экзамену — Москва: Астрель, 479 с.
https://pixabay.com/photos/architecture-travel-old-metropolis-3267405/
Вход или Быстрая регистрация
Предыдущее задание
Вернуться в тему
Следующее задание
Отправить отзыв
Нашёл ошибку?
Сообщи нам!